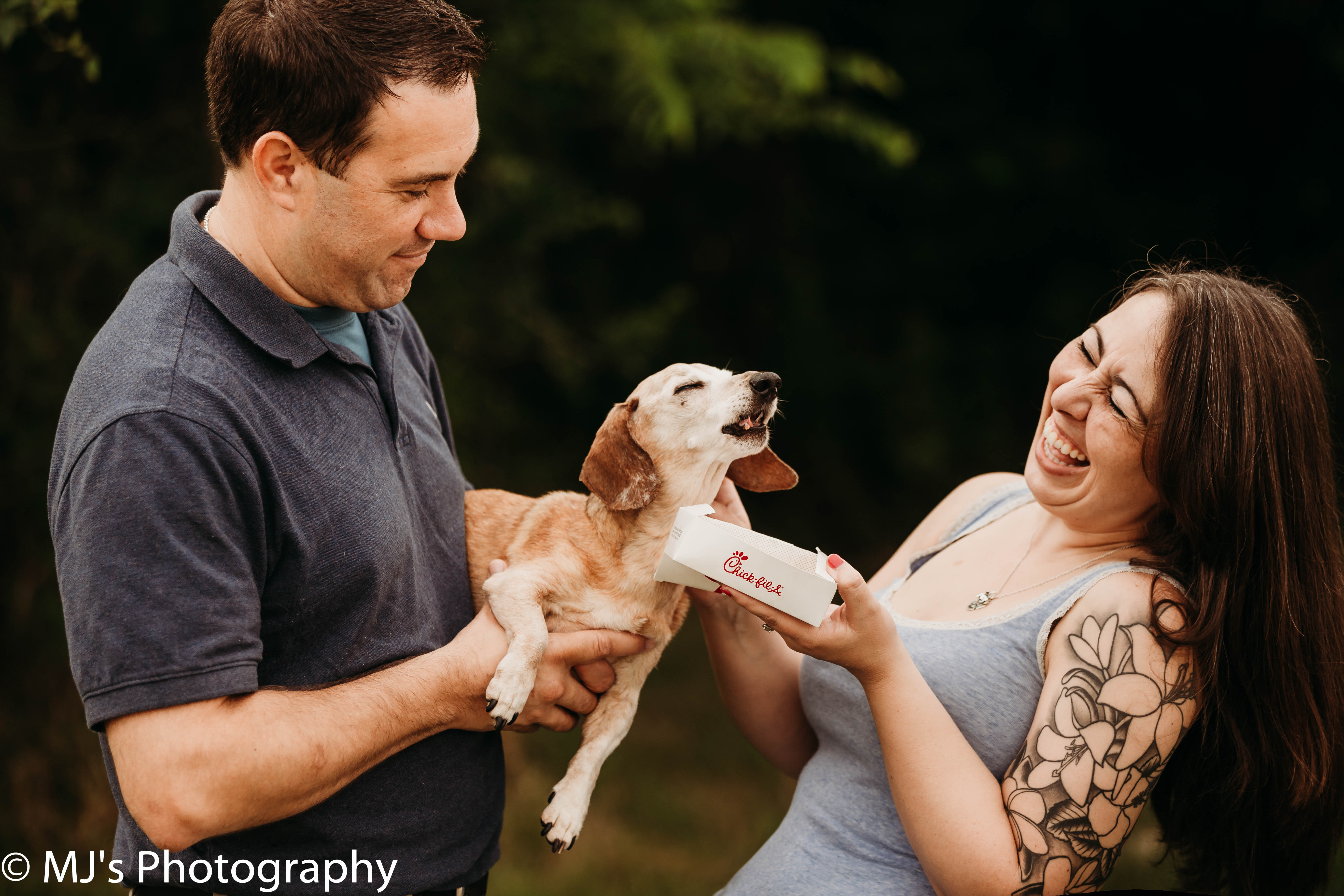 Ashley has been one of my greatest friends since college. She has the most caring heart that anyone could imagine. She currently has 10 dogs. All rescues! She adopts the senior pups that get abandoned at the shelter. We also have to give Carter a round of a “paws”….he lets her do it and loves them just as much lol!

Meet Stanley. This day was Stanley’s last day on earth and it was a joyful one.

Ashley asked if I could photograph Stanley before he left earth side.

Stanley loves his Chick Fil A. So momma brought his favorite nuggets. He enjoyed them so much!

It was so wonderful celebrating his last day. There were lots of tears, but for a moment there was laughter. MJ-Fulshear pet photographer

Here was his momma’s post about his last day.

Last night my legs were cold for the first time in a long time. He always slept by them and the gaping hole in the bed reminded me he wasn’t there. He wasn’t a very big dog, but he had a big personality- I think that’s what took up so much space. I couldn’t have asked for a better last day with my boy though. He had Chick-fil-A for dinner on Monday and again for brunch yesterday (Chick-fil-A because he had standards about his chicken 😂), and  Mary Ann took pictures. Then he slept and I napped with him. For dinner he had rotisserie chicken which has symbolically become the last meal in our home. We have done it with each that have gone before them, and the tradition will continue. When we take on frosty face, hospice type dogs, we know what we are taking on. We are taking on a ton of work repaid with endless love. If you ever see me buying a pre-made rotisserie chicken, please hug me. I don’t only get them during this time, but if I buy one when we aren’t saying goodbye to anyone it’s because I am missing them and I want to remember eating our last meal with them.

The day was so different from any of the others, and his passing was peaceful. Stanley has never been a cuddler, but he would absolutely love to lay next to me in bed. He loved that and eating, so that’s what we did. He was having major struggles between kidney disease, Cushings, and bad anxiety from losing his vision and hearing, but he wasn’t on his deathbed. I didn’t worry that he was suffering, but I knew that he would be soon and I didn’t want that for him. I wanted us to have our last day together on our terms, and without the added difficulty of him being in pain. I will never forget the first picture April sent me of him laying on a cold concrete floor in the Garland shelter. My heart broke and I said “pull him and I’ll take him.” I will never forget the first time I held him after his journey with Lori brought him to me. I’ll always remember the first night he spent in our home stretched out with his belly in the air just completely comfortable. He knew he was home even before we did. At that time, I paid for all of his vet bills and told Carter the rescue was paying for them 😂. Then I fell in love with him and Carter and I decided he should stay. I will always remember his sassy self and his little gimpy trot that never slowed him down for meals. I’ll always remember how during the height of his Cushings he would wake me up at 4am every single morning for breakfast by body slamming himself into my face. He was my little JFP and we had a special bond-that bond that only a mother could continue to put up with him for all these years. I feel so incredibly honored to have been his Momma for the last 5 years of his life, and I am so grateful that we had the ability to help him pass peacefully.

Run free my sweet Stanley aka Manny aka Manny Potts aka Manner aka JFP. I’ll see you at the #rainbowbridge one day 🌈”